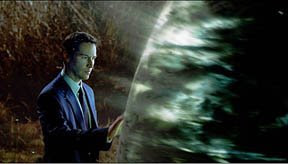 Last night my wife and I went on a date. The previous week I received a pass for two people to an advance screening of the remake of the classic 1951 sci-fi movie The Day The Earth Stood Still.
I was anxious to see the film because of the trailer. My wife also wanted to see it. She looked forward to us spending time together away from the kids, work and our usual weekday routines.
The movie began at 7:30 so we left early, ate out, spent a little time shopping, arrived at the theater, bought a $5 bag of popcorn and settled into our movie theater seats at about 20 minutes before the film started.
Neither my wife or I had ever been to an Imax screening and we were excited by the prospect. After a few minutes of banter from the film's sponsor and the obligatory handing out of door prizes and freebies (I won a $25 gas card) the movie began.
The opening sequence looked promising with a short flash back to the 1920's and the first appearance of an alien probe.
Fast forward to the present where a mysterious object has been detected heading straight for earth at an unbelievable speed. It's target-Manhattan! How convenient.
Just before impact it slows and settles to a rest in Central Park. It's an undulating ball of light. The military shows up with a group of scientists (Jennifer Connelly being one of them). She, of course, is the one who makes first contact after an over zealous soldier shoots the emerging alien. Sounds great, right? Just like the original movie? Wrong! From there things go downhill.
Keanu Reeves plays the stilted, non-emotional alien (no surprise there) Jennifer the hapless female (the first Hulk movie anyone?), Kathy Bates as the crusty government official with a heart of gold (doesn't she always play crusty, heart of gold characters?) and Will Smith's son Jaden, as the emotionally scarred kid with the cynical attitude (another big stretch).
From there the film deviates from the original in content. Instead of an alien diplomat, Keanu (Klattu) was sent to make preparations to destroy mankind because (here it comes--we're destroying the earth with our mere presence! Wow, didn't see that one coming!)
That's right, it's another Hollywood wacko environmentalist propaganda film that places the blame for everything bad that happens to the earth on mankind. Personally I'm getting tired of green this and green that. To paraphrase the late comedian George Carlin, "To think that we (meaning mankind) can have such a devastating effect on our environment is ludicrous and vanity at its utmost." The earth goes through climate changes. It changes with or without us. We are mere specks, flotsam carried away by the wind. Put us all together and we are are minuscule spot on the earth's surface.
Granted we should be good stewards but to the ridiculous extent some environmentalists suggest is preposterous. I for one enjoy my creature comforts. Common sense dictates that you clean up after yourself. Wise use of our resources needs to be practiced but not to the exclusion of everything else.
The story ends with mankind being given one more chance but at a high cost. Trust me when I say, it would be better if the aliens had destroyed mankind.
There are some interesting moments in the film such as the first appearance of Gort, the giant robot guard, the destruction by the nanite locust, the glowing ship and a few (mind you a very few) funny sequences.
The Day The Earth Stood Still is not a horrible movie-it's just not a great movie. They should have left well enough alone. The original classic is far superior, even without all the fancy visual effects. The Day The Earth Stood Still? Leave it stand and rent it on DVD when it comes out.
Posted by BAM at 6:15 AM