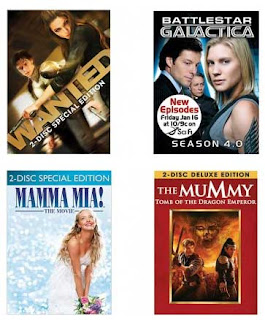 Four Universal Studios Home Entertainment DVD sets you need to check out are sure to be big hits this Christmas season.
Overshadowed by the big name comic book movies this past summer: The Dark Knight, Iron Man, The Incredible Hulk and Hellboy 2, Wanted delivered comic book action on all fronts.
James McAvoy stars as Wesley who discovers he comes from a long line of assassins belonging to the Fraternity. Angelina Jolie stars as fellow assassin Fox, who convinces him to join the Fraternity to track down the man who killed his father.
Along the way Wesley digs up the history of the Fraternity: a secret assassination organization responsible for killing a few to save the many.
Featuring over-the-top action, ultra-violence and killer visual effects, Wanted delivers on all counts. The 2-disc DVD set includes Digital Copy DVD, extended scenes, featurettes, stunts, motion comics and a few surprises. You're sure to 'Want' it.
Christened as one of the best shows on TV, Battlestar Galactica took a classic TV series from the 1970's and revised, reinvigorated and reinvented it into a thrill-a-minute sci-fi series that keeps viewers glued to their seats and guessing as to what comes next.
Season 4.0 is to be the last of the series. In it viewers are witness to the unending struggle of humans against their robotic creations, the Cylons. As the crew of the Battlestar Galactica desperately struggle to survive and ultimately reach earth, nothing will prepare them for the many dangers, tragedies and triumphs that await them.
Ten episodes make up the DVD set with over ten hours of bonus material, including an extended Razor movie, featurettes, podcasts, deleted scenes, blogs and more.
For a movie with a much lighter tone and happy-go-lucky attitude be sure to watch Mamma Mia! The Movie based on the Broadway musical.
Meryl Streep stars, along with Pierce Brosnan and Colin Firth, in the spectacular musical that is sure to make you sing along. Centered around the exploits of mothers, daughters, friends and family, Mamma Mia! is a joyous celebration of life, love and family.
Lots of extras are included such as sing-a-longs for all 22 songs, a 'Making of' featurette, anatomy of a musical number, a behind-the-scenes feature, a music video, outtakes, bloopers, deleted scenes and special Digital Copy. Now that's something to sing about!
Brendan Fraser returns as Rick O-Connell, along with the rest of the O-Connell family, to fight yet another mummy who just won't stay dead.
Jet Li plays the ruthless Dragon Emperor who is brought back to life when a 2,000 curse is broken. His plan is to enslave mankind to satisfy his unquenchable thirst for power. To do so he summons up his long dead army.
The O'Connells battle the Emperor and his army around the world from China to the Himalayas and along the way encounter mystical creatures, danger and adventure. Packed with physical and visual effects, The Mummy: The Tomb Of The Dragon Emperor, is a high-stakes adventure the whole family can enjoy.
The 2-disc Universal DVD set includes a Digital Copy, featurettes, a 'Making of' feature, history lesson, commentary and deleted and extended scenes.
Posted by BAM at 7:20 PM