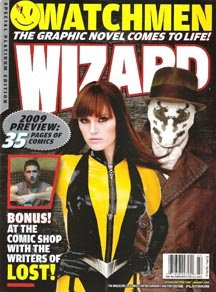 Two of the Watchmen movie characters share the cover of Wizard Platinum for January. Inside see how the graphic novel comes to life on the movie screen.
Things start off strange with an interview with Alan Moore, get ready for some War Stories, behold the new Spawn and sit around the Spider-Man Roundtable.

Darkness and Pitt team-up, Bendis talks Avengers, check out the Top Cow 2009 Sketchbook and DC's Dan Didio shares some secrets.Jeph Loeb and Darwyn Cooke talk about their future plans, IDW's Star Trek counts down, Geoff Johns has some big plans for the Green Lanterns, listen to some Shop Talk, Alex Ross' Project Superpowers heats up and Wolverine's origin is played out on the Silver Screen. Star Trek gets rebooted as does G.I. Joe, Wizard prices Wolverine titles and appearances and Heroes' Tim Kring speaks.
Posted by BAM at 5:01 PM