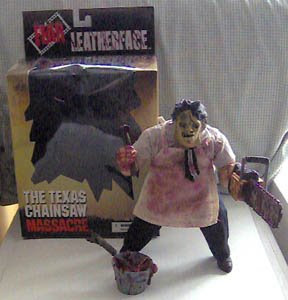 Who can ever forget the frightening first appearance of Leatherface in the classic horror flick, The Texas Chainsaw Massacre? Leatherface set the standard by which other psycho, demented killers had to come up to. Jason, Freddie and Michael and a whole legion of bloody butchers owe a great debt to Leatherface.

Mezco Toyz has up-sized Leatherface to their new Cinema Of Fear Roto-Plush series and he looks even scarier than before.

Covering his face is a human skin mask roughly stitched together and hanging loosely on his face. His insane eyes and leering mouth show behind the raged skin holes. Both bloody hands are sculpted to hold the equally bloody chainsaw, hammer and knife. A oversize bucket holds body entrails and bone.

Sculpting of the figure is tight with even the figure's veins and tendons showing in each massive arm. Articulation points are nicely hidden in arms and legs with the torso and head pivots free enough not to bind with the figure's clothing.

The clothing is made of real cloth and is loose enough not to restrict any movement. The hands easily and firmly grasp any of the weapons and paint application is crisp with no jagged blend edges and mismatching sections. Blood splatters appear real, much like random splatters would-application is random and not systematic.

Accessories are in-scale with the figure. The chainsaw appears rugged in build and authentic in appearance with its jagged teeth, yellow body and worn handles. The hammer and knife also look worn and well-used. The knife looks home made with its tree limb handle, leather strap and twin screws holding the blade in place. The bucket appears well worn and the entrails within it look disgustingly real. Ewww!
Posted by BAM at 6:49 PM