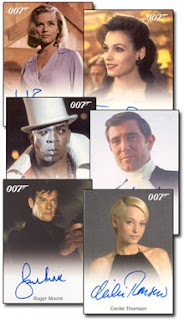 With a limited print run of only 6,000 Rittenhouse Archive's/Sci-Fi Hobby's throwback 1960's style James Bond Trading Cards include images from all 22 James Bond films beginning with Dr. No through Quantum of Solace.

Look for photos of each actor that played James Bond, his foes, friends and women. For my Box I was able to assemble one full Base Set with enough cards left over for a serious dent in a second set.

Randomly inserted Bonus Cards include (two each guaranteed per Box), Autograph Cards (mine are Joe Don Baker and Neil Jackson) and Relic Cards (from Quantum Of Solace: a piece of James Bond's tuxedo and Mr. Greene's suit.)

Also look for Quantum of Solace Cards for the following Sets: The Complete James Bond, The Quotable James Bond, Bond Technology, Bond Villains and several others (I received six such cards.)