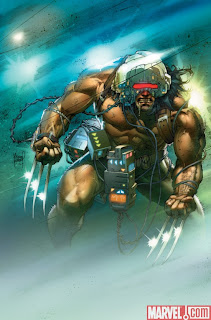 One of my favorite Marvel artists, Ron Garney, along with writer Jason Aaron and colorist Jason Keith delve into Wolverine's past with the infamous Weapon X program-the program that gave him his Adamantium skeleton and temporary memory loss.

In issue #1, a Columbian guerilla group is neutralized by unseen green clawed assailants on San Francisco train a female newspaper reporter is attacked by knife wielding thugs. On a nearby seat a man snores, his head covered by a newspaper.

One of the thugs attempts to wake him in order to steal from him. He makes the mistake of prodding him with his hand gun only to pull away the bloody stump of his hand. The sleeping man is, of course, Wolverine. The other thug leaves-quickly.

A few minutes later as Wolverine walks down a wharf, he meets with Maverick who tells him of a new secret ops group, Blackguard. The group managed to get its hands on the Weapon X secret files and has used them to create their own 'super soldiers' complete with claws. Wolverine investigates Blackguard's abandoned base and concludes that it's up to him to stop them.

Included in the first issue are Weapon X operative bios and a short preview of the new Ghost Riders: Heaven's On Fire series.

Wolverine Weapon X looks to be an interesting series. Unlike the monthly Wolverine series that ties into the Marvel Universe and the Wolverine Origins series that Wolverine's past, his regained memory and his quest of revenge, the new series focuses specifically on Wolverine's Weapon X involvement. Don't miss it!