Sports fans, specifically football fans are in for a real treat times three with the new triple DVD title releases from Warner Bros.
Follow the Steelers on their Road To XLIII as the six-time Super Bowl Winners share their latest Super Bowl triumph. From the playoffs to the Super Bowl you’ll be there for every tackle, touchdown and time-out. Four discs make up the DVD set that include four games.
2008’s NFC Champions, the Arizona Cardinals, surprised everyone when their second year coach led them to the Super Bowl. See what it took to bring the Cardinals from obscurity to a world standing in professional football. Relive the pain, perseverance and pride that made the team what it is today-NFC Champions. Relive the magic including Bonus Features about key players, coaches and pivotal moments.
Volume Four of NFL Greatest Follies proves that professional football players and coaching staffs are not afraid to laugh at themselves.
Posted by BAM at 10:35 AM No comments: Links to this post 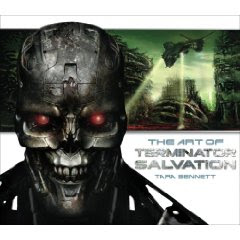 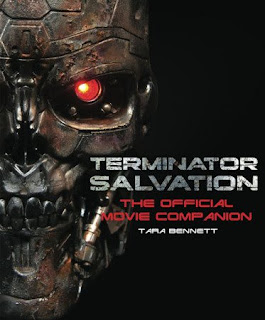 It’s no small feat to take an established movie franchise and breathes new life into it. That’s just what has happened with Terminator movie series with the introduction and re-imagining of the classic future Armageddon series where machines rule the planet and systematically eliminate humans.

Christian Bale stars as future resistance leader John Connor in a future unlike he was prepared for. Something has changed the future and it is now more horrific and terrifying than before. Connor and his ragtag band of resistance fighters are in for the fight for their lives as man meets machine in a headlong battle for world domination.

Inside, readers follow the creation of the film from its pre-production sketches and planning to its final chilling images seen on the screen. Along the way you’ll see what it takes to make such a blockbuster film with photos and text about special effects, both physical and digital, Terminator mock-ups and models, stunts sets, actor interviews and much more. I especially got a kick out of the many different types of Terminators and the incredible attention to detail given to each one. Filled with color photos, the book is a visual journal on the making of the film.

Similar is scope is The Art Of Terminator Salvation, also by Tara Bennett. It too is filled with color photos form the film but with on difference. Many of the photos are of models, pre-production paintings, digital images and design and the creation of the overall look of the film.

If you’re into the meat and bones of film-making then this is the book for you. It’s like going through a visual candy store. It’s pure eye-candy and especially enjoyable to a graphic designer and artist like myself.

The book demonstrates where the real work of the film begins resulting in the culmination of spectacular visual and digital effects, set construction, costume design and the ‘visual feel’ of the film.

A Terminator Salvation novelization is also available from Titan Books by the legendary science fiction writer Alan Dean Foster.
Posted by BAM at 4:54 PM No comments: Links to this post 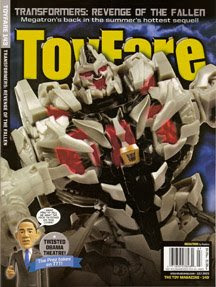 Megatron dominates this month’s ToyFare cover and inside get the scoop on the new Transformers movie and its toy tie-ins. June’s calendar includes Wizard World Philadelphia, lots of new toys and statures and other collectibles and events.

Posted by BAM at 7:49 AM No comments: Links to this post 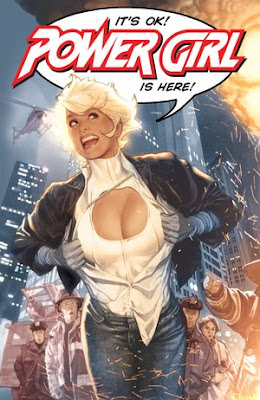 Power Girl gets her own title as the popular JSA heroine adjusts to her new life on Earth.
Justin Gray and Jimmy Palmiotto provide the words, Amanda Conner the pictures and Adam Hughes the gorgeous cover for DC Comics’ newest title.
Power Girl’s first solo adventure starts with the invasion of Manhattan by a swarm of mechanical men dropping from the sky. The massive, multi-eye mechanisms emit emotion controlling waves that sends the crowd into a panic.
Power Girl appears just as things are about to get worse and quickly dispatches with most of the monstrosities, then she is bathed in a fear ray and transported to a hovering ship controlled by the Ultra-Humanite.
It seems he wants her body for his brain and he’s holding Manhattan hostage unless she agrees to the transfer.
In a parallel story readers get a glimpse of Power Girl’s private life as the head of Starrware Labs, that is looking for solutions to Earth’s growing ecological and environmental problems. She is in the process of selecting new staff members. Most are good, hard-working people, except for one candidate-a Mr. Bevlin who seems more interested in power than humanitarian pursuits.
After a heated discussion and subsequent dismissal by Power-Girl, Bevlin leaves in huff vowing revenge for his casual dismissal. Future villain perhaps?
Power Girl is a colorful romp with some good old super heroics thrown in, some personal turmoil and insights and a whole lot of fun.
Posted by BAM at 6:47 PM No comments: Links to this post

Has it really been 25 years!? It's hard to believe that the Teenage Mutant Ninja Turtles started as a simple black and white comic book by two fans of Frank Miller's Ronin series. Who would have ever of thought that the adventures of four mutated turtles who were taught by a rat the way of the ninja would ever catch on?

But they did-and how! Toys, an animated show, movies and tons of merchandise later the TMNT creators Laird and Eastman are multi-millionaires and the proud parents of one of the most successfully franchisees in history.

Lionsgate presents four new DVD collections that contain all of the animated TMNT adventures from its seventh season. Each Turtle gets his own DVD set containing several episodes, some very special features and a 'Slice' of their team represented by a small Turtle figure. Cowabunga!

Posted by BAM at 4:10 PM No comments: Links to this post