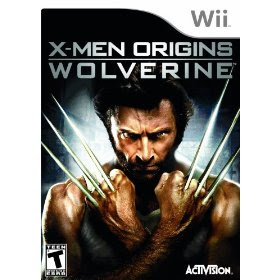 For Wii from Activison comes the claw-slashing, Adamantium-laced adventures of everyone’s favorite Canadian X-Man, Wolverine.
Pop your claws as you become the feral Wolverine while he searches for the last secrets of his past. Slash through foes, both human and mutant, as you prove to everyone that, "I’m the best at what I do and what I do isn’t nice.”
Wolverine travels through many levels based loosely on the chronological order of his life beginning roughly when he was lumberjack. Start off by taking on some jealous lumberjacks who resent Wolverine’s tree-cutting abilities. From there you tackle various bad guys and goons (many from the movie) as you slowly, methodically and viciously work your way up to being the baddest of the bad.
Along the way you can gain extra speed and healing ability by performing certain moves and tasks.
The action pumps up a notch as you fight your longtime foe, Sabretooth in a cluttered compound. Wii’s controls make maneuvering Wolverine seem natural. Although lacking in some areas-such as a consistent soundtrack and lots of blood (what you would expect for Wolverine) the X-Men Origins Wolverine video game is rated ‘T’ for teen and (in my opinion) is a pretty safe play for younger players. Pump up the violence and gore and the game would receive a more mature label. As it is, Wolverine is a bit tame compared to his comic book and movie versions.
Posted by BAM at 9:55 AM