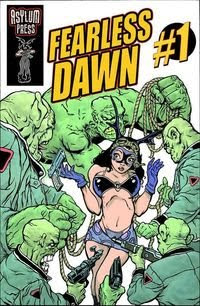 Holy EC Comics! Have Wally Wood, Frank Frazetta and Al Williamson reunited to draw a brand-new comic book? No!? Fearless Dawn from Asylum Press is written and drawn by Steve Mannion. Steve who!?

I can't say I know who Mr. Mannion is but I will say this. I'm a big fan of his work. Talk about energetic fun!

Fearless Dawn is a misfit, highly unorthodox and unconventional heroine who is in it for the money, thrills and debauchery.

Readers join Dawn as she picks up her newly repaired jet and zips off to Manitoba for a highly illegal Aggro Combat Drug that turns everyday soldiers into monstrous super soldiers.

Too little too late she realizes that it's a trap and before she can react she's knocked out and imprisoned. Her old adversary, Neo-Nazi General Fritz and her muscle-bound henchman, Fritz are out for revenge.

To her rescue comes the super hero Number Seven who gets his butt kicked by the super soldiers. He's thrown into the same cell as Dawn. Their only means of escape is to take the Combat Drug that Dawn secreted upon herself. They do and boy the sparks are about to fly-next issue! Arrgh! I don't know if I can wait to September.

Fearless Dawn is a breath of fresh air in the over-cluttered comic book market predominated by conventional superheroes. She's brash, bad, bodacious and one of the best things to happen to comics in a long time. Well done!