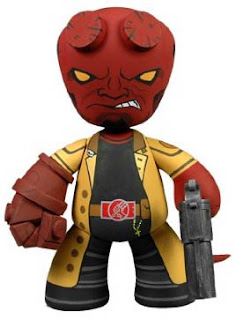 Who would ever think that Hellboy could be cute? Well, he is, or at least his Mezco Mez-itz Hellboy, The Golden Army, limited edition, 6-inch articulated figure is.

The Hellboy figure is a simplified, designer vinyl, mini-monster painted in flat reds, browns, black and gray. His oversize red, bald, head has a painted on face with Hellboy's trademark sneer, short, filed off horns with pulled back black hair on its sides.

He wears his long trench coat, also painted on, black shirt, pants and boots. His right hand is the Hand of Doom as seen in both movies and in the comic books and off course, he has his long prehensile tail. Included with the figure is Hellboy's favorite weapon, the Samaritan.

The figure comes in a black box with white lettering and clear panels on the front and back. An Abe Sabien figure is also available. The Vinyl figure is cleverly articulated and does not distract from the figure itself. Paint application is smooth, consistent and shows no rough edges or slop-over. The figure stands easily on its own and the Samaritan fits snuggly in its hand.

Look for cool details such as Hellboy's belt buckle, trench coat buttons, charm chain, serpentine tail and the Samaritan handgun with oversize ammo chamber.
Posted by BAM at 9:00 AM