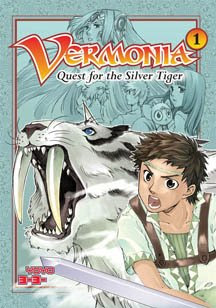 From Candlewick Press and written and illustrated by YoYo, a new young group of artists and writers from Japan, comes Vermonia: Quest For The Silver Tiger 1.

The story takes places on a distant blue star where garage band members Mel, Jim, Naomi and Doug talk and do things any typical group of preteens obsessed with skateboarding do.

But, when Mel is kidnapped and put in prison on the world Turtle Realm, her friends suddenly find themselves in the position of being her rescuers.

With the aid of the magic squelp Satorin they travel to Turtle Realm-a world terrorized by a horrific conquering army.

They arrive and are surprised to discover their arrival was prophesized ages ago. The prophecy tells of four warriors who would return the planet's rightful queen to her throne. But, do the four friends have the will and the courage to release their warrior tendencies and fulfill the ancient prophecy?

Vermonia is lavishly illustrated, contains memorable characters and tells a exciting story. It's funny, frightening, full of adventure and fantasy and fun to read.