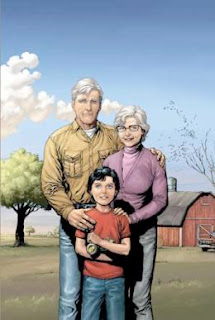 Superman's origin and life in Smallville has been told and retold dozens of times.  Some have been good, some not so good.  All seem to concentrate more on Superman's escape from the exploding Krypton and less on his identity as Clark Kent and his formative years.

Writer Geoff Johns and artist Gary Frank have collaborated to make (in my opinion) the best story about both Superman's and Clark Kent's early life.

The first issue of the DC Comics' six-part  mini-series sets in place all of the key players in Clark Kent's early life such as Ma and Pa Kent, Lana Lang, Lex Luthor and his best friend Pete Ross.

You'll witness young Clark's powers manifesting themselves such as flight, heat vision, x-ray vision, super strength and invulnerability.  You'll also be there when romance blossoms between Clark and Lana and the beginnings of Lex Luthor's hatred toward then Clark Kent/Superman.

Watch as the heroic nature of Superman emerges in young Clark and his first encounter with the spaceship that brought him to earth and his unsettling experience of discovering his true nature as revealed by his Kryptonian parent's holograms.  You'll even see Clark don his Superman costume.

The story has everything and brings years of continuity together in a neat, well-written, beautifully illustrated saga about the birth of a hero.
Posted by BAM at 5:41 PM