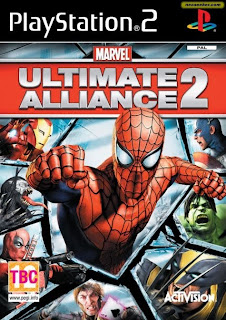 Twice the action, twice the killer graphics, twice the special effects and twice the fun!

Based upon Marvel's Secret War and Civil War series, Ultimate Alliance pits heroes against heroes and villains against villains in a no-holds barred battle royal with the victor either free from government registration or forcing the opposition to register under the Superhuman Registration Act

Rated T for teen, the new Ultimate Alliance 2 video game is compatible to all game formats and features some of the most dynamic graphics, excellently rendered figures and blow your eyes out soundtrack and sound effects.

Assemble your four character dream teams and for the first time combine the powers of two characters for the ultimate power rush.

Look for 250 new fusing powers, character expansion with Cyclops, Psylocke and Blade and multiplayer team-ups online and off.  It's like playing the ultimate RPG with full 360 degree action, a huge selection of environments and locations, full object manipulati
Posted by BAM at 1:07 PM