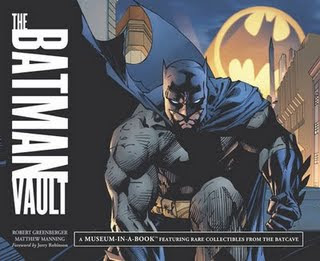 With the resounding success of the recent Batman movies, the animated series, the comic book series and the current Blackest Night storyline, Batman is more popular than ever.

In Running Press’ new book, The Batman Vault, by Robert Greenberger and Matthew K. Manning, readers learn everything there is to learn about the Dark Knight.

Follow along as the writers examine the Caped Crusader's roller coaster ride through the decades, starting with his first appearance in Detective Comics.

Through archive reproduction of art, text and collectibles, you’ll thrill to the exploits of Batman beginning with his dark and vigilante days to the introduction of the Joker and Robin, his wartime team up with Superman, the frivolous 1950’s fantasy and science fiction adventures, his television show phenomena, retuning to his dark roots and to his current rank as the #1 fan favorite superhero-without super powers!

Not bad for a man traumatized by his parents’ death, who dresses up as a bat, lies in cave, has all the latest high tech toys and who has even gone one-on-one with Superman and won!

This is a phenomenal book packed with artifacts, rare photos and art, interviews, observation and so much more.  It’s enough to drive you batty!
Posted by BAM at 4:08 PM