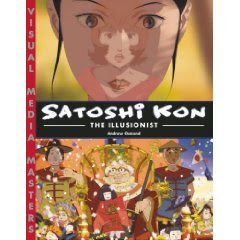 Exactly what is illusion?  How does one go about creating illusions?  Illusion and the art of perfecting the use of illusion is Japanese director Satoshi Kon’s expertise.

Considered one of the most innovative and daring animation directors in the world, Kon’s influence can be seen in not only Japan’s movie industry but in movie making all around the world.

Beginning his career as a manga artist, Kon developed an eye for pushing the envelope of visual story-telling and soon made the transition to animated film or Anime.  Teaming with visionary animator Katshiro Otomo, the creative team produced such notable and ground-breaking anime as Perfect Blue, Paranoia and others.

Each film examined individual characters, their aspirations, motivations and most of all their tenuous hold on reality and illusion.  Writer Andrew Osmond and Stone Bridge Press examine the long and illustrious career of Satoshi Kon from his humble beginning as a young manga artist to his phenomenal success as a director.