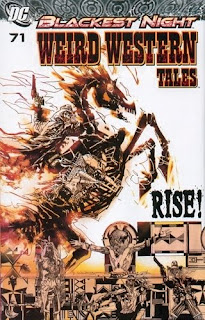 I really like the direction DC Comics is taking with its Blackest Night series and tie-ins.  DC, under the helm of Dan Didio, is providing comic book readers with not only a killer storyline but, unlike a certain DC competitor, continues the storyline in its various titles and mini-series without forcing readers to buy each and every tie-in just to understand the story.

The Blackest Night series, subsequent mini-series and one-shots are self-contained and all make excellent reads.

Such is the case with Weird Western Tales #71.  Dan Didio and Renato Arlem tell a tale of the Old West in a modern West setting.

A descendent of Quentin Turnbull, the arch nemesis if Jonah Hex, pays tribute to his lost ancestor by keeping a twisted version of the Old South alive.

When the black rings of the Black Lantern pellet the nearby cemetery some recognizable DC Western stars begin to resurrect with blood and death on their rotted minds.  Scalphunter, Super-Chief, Firehair, Bat Lash and Jonah Hex are reanimated and proceed to decimate the nearby town and kill its inhabitants.  When Quentin Turnbull is resurrected his descendent is overjoyed.

The thought of Quentin regaining his rightful place in a resurrected South is almost exciting as the thought of him destroying the resurrected Jonah Hex.  Guns are drawn and...somethings are thicker than blood.

This is a great story with great art and its a real treat to see some of the old DC Western stars reappear-albeit in slightly perverted forms.

Posted by BAM at 10:04 AM No comments: Links to this post 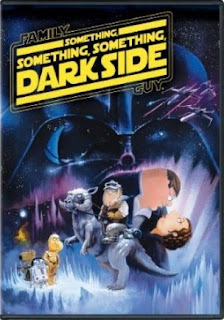 Star Wars is an institution and like any institution it has its fans and distracters,  In rare cases the distracters are its biggest fans.  Such is the case with the creative team behind Family Guy.  Only they could possibly have the guts to parody The Empire Strikes Back and get a way with-with George Lucas' blessings!

Chris stars as Luke Skywalker, Peter as Han Solo, Stewie as Darth Vader-well, you get the idea.  The laughs are huge and the innuendos fly as Family Guy tackles the Dark Side and leaves it begging for mercy.

Posted by BAM at 6:13 PM No comments: Links to this post