In celebration of DC Comics' 75th Anniversary, Warner Bros. Animation has released a new DVD: Secret Origin, The Story Of DC Comics narrated by Ryan Reynolds.
The DVD looks back over the last 75 years to the origin of DC Comics, then published under the name National Periodicals, beginning from its pre-Golden Age titles.


Beginning with the creation of Superman, Batman and Wonder Woman, DC Comics set the standard by which dozens of other comic book companies were held to. 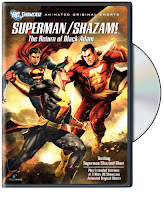 Follow DC’s publishing history through WWII, the end of the Godden Age, the dawn of the Silver Age with re-invented Godden Age heroes like the Flash, the Anti-establishment Bronze Age on up to the Modern Age headlined by the British Invasion and the reinvention of the comic book genre.
Writers, artists, editors and staff from the Golden, Silver, Bronze and Modern Ages recall the events that shaped comic books and DC Comics in particular. Look for such comic book luminaries as Neal Adams, Frank Miller, Grant Morrison, Lein Wein and many others as they weigh about their generation’s input into the evolution of DC Comics.

Secret Origin, The Story OF DC Comics allows viewers to uncover the history of the world’s greatest super heroes. Don’t miss it.


Superman/Shazam! The Return of Black Adam from DC Showcase Animated Original Shorts spotlights the first meeting of the Man of Steel and World’s Mightiest Mortal.


The story opens with orphan Billy Batson as he copes with his inner city slum neighborhood. Billy’s enthusiastic attitude never wavers despite his surroundings.


Unbeknownst to Billy a fiery ‘meteor’ crashes to earth nearby. When the fire and smoke clear a black clad figure, whose chest is emblazoned with a lightning bolt, steps forward. He is Black Adam whose has been exiled from Earth for 5,000 years.


He has returned to Earth to destroy the new chosen one who is to be Earth’s protector by the wizard Shazam. Originally Black Adam was chosen until his newfound power corrupted him and he believed himself to be a god. Banished from Earth he has returned to take his rightful place as ruler and to destroy his would-be replacement.


Elsewhere Billy Batson is meeting Clark Kent for breakfast. Clark plans to write an article about Billy for the Daily Planet. Their meeting is cut short when Black Adam attacks.


He plans to kill Billy who has been chosen as Earth’s new guardian. Too bad no one told Billy! As Adam attacks Clark Kent retaliates as Superman. In the heat of battle Billy escapes and winds up taking a very unusual subway ride-a ride to the inner sanctum of the wizard Shazam.


Once there Shazam bestows upon Billy the power of Captain Marvel. All Billy has to do is utter Shazam’s name and he is instantly transformed into the mighty Captain Marvel. Good thing to because Black Adam is still seeking to kill him.


When all seems lost Billy transforms into Captain Marvel, Superman teams with him and they manage to defeat Black Adam. Superman/Shazam! The Return of Black Adam is the consummate super hero slugfest with lots of explosions, devastation and incredible feats of strength, power and fighting prowess.


Included with the short feature are three other DC shorts including the previously released Green Arrow and Spectre shorts and a new Jonah Hex short. Also included is a special selection of network TV DC Comics series shorts from various DC animated series.


All-in-all it makes a ‘super’ package that DC fans are sure to enjoy. Shazam!
Posted by BAM at 6:31 AM