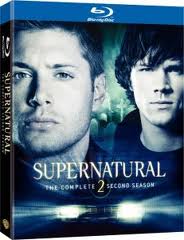 For the first time the Second Season of the hit TV series Supernatural comes to viewers on Blu-ray.  If you thought Supernatural was good on standard DVD, you've not seen anything until you check it out on Blu-ray!


Monsters never looked creepier, demons and devils more horrific or nasty creatures of the night more real that when you see them on Blu-ray.
Join brothers Sam and Dean Winchester as they travel the United States encountering every type of evil imaginable.  Every legend, superstition and nightmare is investigated and confronted.  Here's the kicker-the brothers don't always win and they and others get hurt, some killed.
Every episode from the Second Season is included along with the original DVD extras and some very special Blu-ray goodies such as an interactive road map, interviews and more on four-discs from Warner Bros.
Posted by BAM at 12:31 PM