The Future, Sci-Fi Dictionary And Swarm

McFarland & Company, Inc. feeds academic fever with trio of new titles that are so packed full of information that even the most staunch academic will pause and ponder the task set before them. 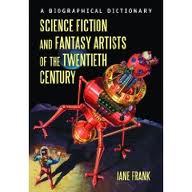 First up is The Worlds Of Back To The Future, edited by Scorch Ni Fhlainn. Compiled Critical Essays On The Films, the book examines each film for content, social commentary, moral and political nuances and philosophical references. Marty McFly and Doc Brown and the characters from all the films are put under a microscope to see what makes them tick.
A Biographical Dictionary of Science Fiction And Fantasy Artists of The Twentieth Century by Jane Frank is packed with information on the most influential artists of the respective genres. Each artist's life is examined in full and a complete listing of his or her work is included.

A Sci-Fi Swarm And Horror Horde from Tom Weaver contains 62 interviews by actors, actresses, directors and other TV and film professionals. The interviews center around the work they did on classic sci-fi and fantasy movies and TV shows. Filled with anecdotal gems, the book gives readers a real insider look at the making of such films as Them!, The War Of The Worlds The Wild, Wild West, Lost In Space and dozens of other film and TV series.
All three books make perfect reference material for anyone interested in the sci-fi and fantasy genres in film, TV and art.
Posted by BAM at 5:50 PM