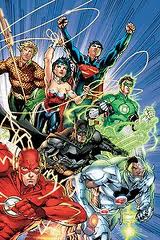 After the tumultuous events in Flashpoint, the DC Universe was forever changed. The Flash (Barry Allen) hoping to save the life of his mother travels back through time and manages to save her. The ripple effects through time drastically alter the DC timeline in which millions of innocent people die because of his time jaunt.
In a desperate attempt to set things right the Flash once again jumps though time and stops himself from completing his first time travel mishap. He succeeds and returning to his own present time Barry Allen believes all is well. It is-sort of.


Justice League #1 opens with the police pursing Batman who is pursuing a rampaging alien/demon. Just as things get dicey Green Lantern shows up and stops the police and alien rampage, but not before the alien escapes and he and Batman reluctantly team-up to track it.


They find it just as it self-destructs after leaving a strange impenetrable box of alien design. Green Lantern suggests they track down the new superhero, Superman, since he’s an alien, to see if they can get some answers.


Cocky and self-assured of his power because he has a power ring, Green Lantern boldly confronts Superman on to be trashed. Superman appears and Batman is left alone to face him. In this new DC Universe super powered being are suspect and not trusted by the general populace. Only batman prefers it that way (he would).


Justice League #1 is a great start to what I hope is a revitalization of the DC Universe. If DC writers, editors and artists can manage to introduce new concepts and ideas while at the same time paying homage to the original DC Universe the re-launch should be successful. I have my fingers crossed.