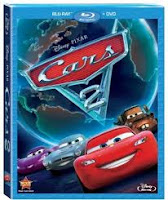 Disney/Pixar have really raised the bar with Cars 2. With every new Pixar Animation release the advances made in computer animation are phenomenal. Pixar has always turned out a great product with interesting characters, clever stories and lush backgrounds, but Cars 2 has outdone every Pizar animated film before it.
The Cars 2 plot involves Lightning McQueen taking part in the World Grand Prix. He takes his best frieind Mater with him and you can just image Mater in different countries!

Somehow Mater gets mistaken for a super spy and winds up entangled in a sinister plot to enact revenge on regular cars by lemon cars.


Along the way he meets a whole new cast of characters including a British spy car whose voice is provided by Michael Caine.


The animation on this film is amazing-especially the panoramic shots of cities from around the world. The visual effects are astounding and the story keeps you glued to your seat. Cars 2 are an action-packed and fun-filled film that the entire family can enjoy.


The Blu-ray/DVD combo also includes two short animated films, a Director's Commentary, a World Tour Map, featurettes and much, MUCH more.
Posted by BAM at 10:22 AM