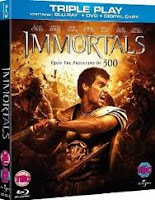 Theseus, the bastard son of a disgraced village woman, has been trained since childhood by the old man of the village to be a warrior.
Unbeknownst to him, the father of the gods, disguised as the old man, has been preparing him for the upcoming conflict between the freed Titans and the gods, set in motion by the stealing of the Epirus Bow.
King Hyperion, furious at the gods because of the loss of his wife and child, is determined to find the bow, free the Titans and destroy the gods. His power-mad schemes include destroying all those that worship the gods and setting himself as the ruler over all.


When Theseus’s village is ransacked by Hyperion’s troops and his mother is brutally murdered by Hyperion before his eyes, Theseus loses hope until he and his fellow prisoners are freed by the beautiful Oracle and her three sisters.


The Oracle has foreseen Theseus’s future and is determined to guide him to the bow and ultimately the defeat of Hyperion.


As the epic unfolds, massive brutal battles are fought; strange mystic lands are explored and in the final battle determines the fate of the gods and mankind. It is a movie of epic promotions with horrific battle scenes, stunning visual effects and vast vistas. Mickey Rourke shines as the evil Hyperion and John Hurt stars as the god disguised as the old man.