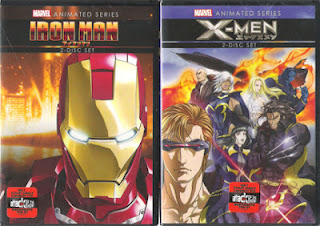 Anime is everywhere.  The Japanese form of animation has had a huge impact on animation and art all around the world.  Filled with symbolism, packed with both subtle and in-you-face sequences and laced with a slightly unworldly flavor, Anime has both changed and shaped contemporary American animation.
Sony Pictures have taken two of Marvel Comics iconic titles and transformed them into Anime while still retaining the essence of both.
Iron Man Anime sees Tony Stark about to retire his Iron Man armor and introduce a new consumer armor called Iron Man Dio while in Japan.  He's visiting the Land of The Rising Sun in order to implement his new Arc Generator that will provide unlimited free energy to the world.
The secretive Zodiac organization funded by A.I.M. has other plans.  They plan on stopping the Arc Generator project, stealing the new Iron Man Dio armor and eliminating Tony Stark.  It's all-out action and intrigue as Tony Stark must once again don his Iron Man armor in order to stop Zodiac and thwart A.I.M.'s nefarious plans.
Included with the 288 minutes of action are several documentaries about Iron Man and his armor and interviews with the voice actors and a round table discussions with the series' creators.
The X-Men Anime DVD set finds the X-Men reunited after one of their own is killed and an associate of Professor X is kidnapped.  The X-Men come face-to-face with U-Men whose members steal mutant organs for transplant in order to increase and strengthen its own army.
Long dead secrets are revealed altering the X-Men forever. Like the Iron Man Anime DVD set the X-Men Anime set includes lots of extras such as featurettes, the new Anime take on the team and interviews with the creators of the series.
Get ready for some Marvel Comics mayhem as only the X-Men and Iron Man can deliver it.  Fans of the popular comic books series will love the unique takes on two classic series and Anime lovers will get a kick out of Japanese visions of each iconic series.
Posted by BAM at 12:14 PM