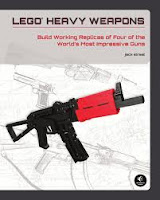 LEGOs have been around for decades. Small plastic pieces that snap together were first introduced packaged in large tubs filled with the multi-color small blocks. Kids assembled various objects using their own imaginations.

Later LEGOs transformed to kits that when assembled allowed LEGO owners to make specific items such as Star Wars ships, Harry Potter scenarios and various other pop culture or movie props or scenes. The popularity of LEGOs continues to build. Theme parks have cropped up based around LEGOs. Everything in the parks, including the rides, are assembled from LEGOs. Amazing.


Over the years I’ve seen every imaginable object, item or thing constructed from the sturdy little plastic pieces. But…No Starch Press pulled a fast one on me and introduced me to a whole new use for LEGOs…weapons!


Not real weapons, but facsimiles of weapons. In Lego Heavy Weapons, author Jack Streat (who happens to be only 17 years old!) has assembled an impressive piece of work. Talk about a LEGO fanatic!


In his new book Jack instructs readers how to assemble replicas of four impressive 1:1 Scale guns. They include the Desert Eagle, AKS-74U, Jungle Carbine and SPAS 12. Full assembly instructions guide the readers step-by-step through the process. What’s so impressive about the weapons is not only their look but the fact that the bullet chambers actually work! What’s next, LEGO landmines, bazookas and grenade launchers!?


Given Mr. Streat’s talents, full-scale tanks and aircraft will be next. To say I’m impressed would be a huge understatement. LEGO fans of all ages need to check out this book. However, pay close attention to the warning statement-these weapons can actually fire and they have been mistaken for the real items.