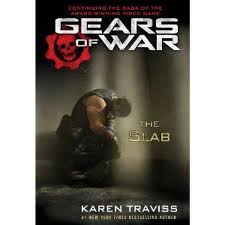 I'm be the first to admit I'd don't know that much about the Gears Of War video game series.  I know a lot of people play and swear by it.  I've watched video clips, seen much of the merchandising but to actually have sit down and played a game, I haven't.

When Gallery Books send me a review copy of Gears Of War; The Slab I was immediately intrigued by the striking cover of a man dressed in military gear, sitting slouched on a crude bed or piece of furniture surrounded only by solid stone walls.

I figured, "What the hey! I'll take a chance and read the book, not really knowing what to expect."  I'm glad I did.

Author Karen Traviss has taken what could have been a shoot 'em up, aliens versus humanity storyline and made it a tight, taunt thriller with plenty of intrigue, suspense and twin tales of redemption.

Humanity is in peril.  The last defended stronghold of humanity is being attacked by the Locust Horde.  Marcus Fenix abandons his post to save his father and the last outpost falls and his father is buried in the rubble-assumed dead.

Marcus is court-marshaled and sent to the isolated island prison, The Slab.  Unbeknownst to Marcus his father survived and is also imprisoned and is desperately trying to escape to continue his personal war against the Locust.

The Slab is a real page-turner, ripe with careful character development and a plot that keeps you guessing page after page.
Posted by BAM at 6:05 PM