The Art Of Gears Of War 3 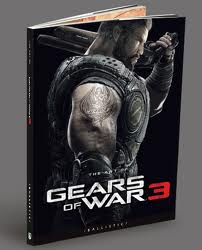 How does one go about describing visual art? To the common man it is simply the process by which an artist recreates objects on paper or canvas using pencil, ink or paint.  Put simply, it is making "pretty pictures."

To an visual artist, regardless of the type, it is the process by which they translates their thoughts, emotions and technical skills into a viable two dimensional form that imitates three dimensions.  It is far more than making "pretty pictures".  All artists leave a little bit of their souls with each piece of work they complete.

Fine artists tend to place themselves above mere "commercial artists".  After all they do it to "express themselves and complete their own vision."

Commercial artists, on the other hand, do it for the money.  I could not disagree more.  As a commercial artist/graphic designer myself I have to say that a small piece of me lingers in each piece of art I've produced.  Despite the fact that I did each for money, personal creativity, of any type, still demands commitment and a strong sense of purpose.

Didn't the great Renaissance artists all produce work for patrons and the church for a fee.  Wouldn't that make them "commercial artists"?

Why am I bringing this subject up?  To make a point.

Many of today's finest artists are commercial artists.  And many of those are working in video game design industry.
Ballistic Publishing has just released its latest art book called: The Art Of Gears Of War 3 and if after looking at this book if you have any doubts as to the tremendous talent that goes in to designing such a complex video game then I have serious doubt as to your capacity to really understand art and artists.

Just the design of the book itself with its high gloss cover wrapped around 300 plus pages packed with production art is impressive enough on its own.

When you look inside and imagine the talent it took to design characters from scratch, create environments, equipment, vehicles, creatures, special visual effect and all of the other visuals associated with the game play the mind staggers.

The designers of Gears OF War 3 from Epic are a talented crew.  Designing the game involves so much more than just what you see on the screen.  Designers must understand engineering, fluid dynamics, lighting, the human figure, painting and pigment application, all the elements and principles of design, numerous scientific laws and functions, biology, muscle structure, fabrics, visual effects-the list goes on and on.

Besides being a book that contains "pretty pictures" it also contains notes and comments on the various designs, techniques, game mechanics, vectoring, texture mapping, sculpture, rendering and the hundreds of the other processes necessary in order to produce an award-winning video game.

So, the next time you watch or play Gears Of War 3, or any other video games for that matter, look past the effects and visuals and see what it takes to produce what I consider a classic piece of art that is no less impressive than those done by the old masters.