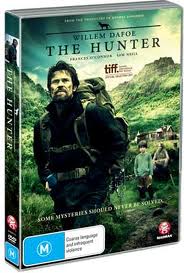 Actor Willem Dafoe (Spider-Man and Platoon) stars as mercenary Martin David who is hired to hunt a Tasmanian tiger thought to be extinct.  Hired by a company that wants the tiger's genetic material, Martin takes on the guise of a scientist.

He sets up base at a farmhouse owned by a family whose father is missing.  Normally a loner, Martin soon becomes attached to the family.  Conflicted about his assignment he soon finds himself entrenched in a dangerous game that threatens not only himself but his adopted family as well.

Willem Dafoe delivers a one-two punch performance of a loner torn between what he is hired to do and what is right.  Look for the DVD and Blu-ray from Magnolia Home Entertainment.  Included on the DVD or Blu-ray are featurettes about the film, cast, the tiger and Tasmania along with deleted scenes, commentary and theatrical trailer.
Posted by BAM at 8:56 AM