Superman Vs. The Elite 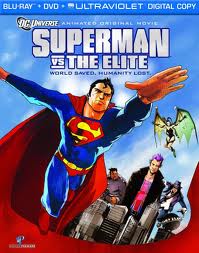 Is Superman obsolete?  Is he a relic of the past?  Does truth, justice and American way really stand up in a world where evil reigns and the bad guys get off Scot free?  Should evil men be punished-no, killed for their crimes against humanity?

Those are just a few of the questions Superman must ask himself when a new brand of superhero shows up.  The kind of superhero who takes the fight to the bad guys and takes no prisoners.
When Superman comes up against the Elite he is unprepared for their savagery and lack of conscience.  Ultimately they must face off against him.  Will Superman's vision of the best of humanity shine through or will the world be reduced to only the strong survive?

Warner Bros. Animation proudly presents Superman Vs. The Elite- a different kind of Superman story that is sure to have Superman fans talking for years to come.

Included in the Blu-ray/DVD/Ultraviolet Combo pack are selected Superman animated TV series episodes, featurettes, storyboards, commentaries and a surprise sneak peek.
Do not miss this powerful story of redemption and hope.
Posted by BAM at 4:04 PM