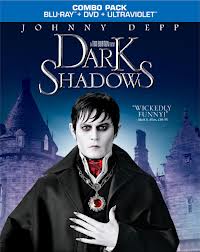 Over 40 years ago one of my all-time favorite TV shows was Dark Shadows.  It involved Barnabas Collins, a reluctant vampire, and his friends, family and foes.  It was dark, scary, and sometimes devilishly funny and for a very short period the top rated daytime soap opera.

Director Tim Burton is also a fan of the cult classic TV series and recently he directed a modern adaptation of the TV show.

In the film Barnabas Collins (played to perfection by Johnny Depp) is wild and wanton playboy from the 18th century.  He lives a lavish lifestyle, as does his wealthy family housed in Collinworth Manor.

One day Barnabas makes the mistake of snubbing an amorous witch’s advances and he pays a heavy price.

The witch enchants him, turning him into a vampire and buries him alive.  Two hundred years later he is inadvertently unburied and finds himself smack in the middle of the early 1970s.
He discovers his family fortune is gone; Collinworth Manor is in shambles, as well as his descendents.  Everyone it seems has their own dark secrets.

The film follows Barnabas as he acclimates himself to modern times and modern times acclimates to him.  Dark humor intermingles with horror as Barnabas, his family and his would-be lover witch battle it out as to who will rule and survive in Dark Shadows.

The movie is a lot of fun, especially scenes with Johnny Depp. He plays Barnabas straight but as with all of his performances there is more under the skin of his character than first seen.

The Dark Shadows Blu-ray/DVD/Ultraviolet combo also includes deleted scenes, featurettes on the movie and classic TV series, transforming Johnny Depp into a vampire and much more from Warner Bros.
Posted by BAM at 6:34 AM