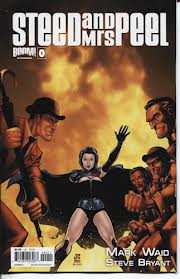 I am so excited!  After the success of Boom! Studio’s Steed And Mrs. Peel mini-series Boom! has continued the quirky British spy series adaptation as a regular monthly series.

The Avengers starred dapper John Steed and the dynamic Mrs. Emma Peel as two-British Secret Service agents during the 1960s.  The show was known for its unusual and often outrageous plots and memorable sets and costumes.

With its dry sense of humor, intriguing plots and over the top situations (all performed tongue-in-cheek) the series was a big international hit.

One of the stories involved the Hellfire Club (the inspiration for the club by the same name in Marvel Comics’ X-Men series).

In issue #0 of the new comic book series a newly revived and revised Hellfire Club is back and this time it has its mission firmly placed in the future.  When Steed and Peel go to investigate they encounter robotic women, advanced technology and the new head of the organization.

When Steed gets a face full of aging dust, Mrs. Peel doffs a robotic disguise and both discover the secret behind the new Hellfire Club.  What fun!

Writer Mark Waid (a big Avengers fan) and artist Steve Bryant bring back the Avengers in style.  Be sure to check out the Hellfire Club cover fashioned after the famous X-Men cover.  A tribute of a tribute!
Posted by BAM at 6:42 AM