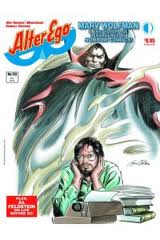 Front and center Marv Wolfman talks about the Silver Age resurgence of horror comics in Alter Ego #113 from Twomorrows Publishing.

Inside Wolfman talks about his early career and the days he spent in fandom.  Learn about his time with Skywald cranking out horror stories and how he took part in the DC explosion and implosion in the early 1970s.

Of course Wolfman’s horror claim to fame came when he scripted Dracula for Marvel Comics and collaborated with artist Gene Colan.  In the following years he would expand his writing repertoire to include almost every title from Marvel and DC Comics eventually hitting the big time, along with George Perez, on The New Teen Titans.  Plenty of photos, art and covers are included in the articles.

Alter Ego concludes its interview with Leonard Starr, discover what comic books were like after the Comics Code Authority was put in place and just who was the Unknown Steranko?

Part II of The ’50 Years Of Comic Book Fandom” is included and fans say a final farewell to Sheldon Moldoff, Eduardo Barreto and Emilio Squeglio.
Posted by BAM at 6:44 AM