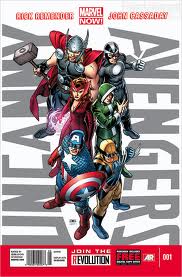 After the cataclysmic events in the X-Men Vs. series Professor X is dead, Cyclops is imprisoned, the Scarlet Witch is back and the entire mutant population is suspect.

In the hope that relations between humans and mutants can be rectified Captain America and Thor recruit mutants to form a human/mutant coalition super group called the Uncanny Avengers.

The only problem is there are mutant and human factions who don’t want the reunification of humanity and mutantkind and they will do anything it takes to stop them as Cap, Thor, Havok, the Scarlet Witch, Rogue and Wolverine soon discover.

Who’s heading up the orchestrated conflict?  None other than Cap’s oldest foe, the Red Skull and as the last panel in the comic shows he has acquired the brain of Professor X and plans to unravel its powerful secrets.  Stay tuned, things are about to get interesting.

Much like DC Comics re-launch one year ago, Marvel Comics is rebooting its titles, simplifying its universe and kicking off a whole new era albeit spaced out over several months as opposed to all at once like DC Comics did.
Posted by BAM at 10:33 AM