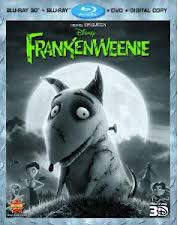 Long before he changed the face of superhero movies with Batman.  Years before he revolutionized and popularized stop-motion animation with his The Nightmare Before Christmas, James And The Giant Peach, Coraline and Corpse Bride. Decades before re-envisioning classic movies and novels like Planet Of The Apes and Sleepy Hollow and introducing totally unique characters like Edward Scissorhands and Peewee Herman, director Tim Burton produced a little independent film called Frankenweenie.


A small film chronicling the love a boy had for his dog which he brought back to life soon became a cult classic and now after so many years it is a major stop-motion animated film brought to movie goers in 3D.


Walt Disney Studios is proud to present the 3D/Blu-ray/DVD/Digital Copy release of an updated Frankenweenie as envisioned by its creator Tim Burton.


Follow young Victor as he brings his beloved pet back from the dead and soon discovers that not everyone is pleased by his success.  Family, friends, school mates and townspeople soon discover that defeating death has monstrous consequences.


The 3D/Blu-ray/DVD/Digital Copy combo includes lots of extras such as Tim Burton's original Frankenweenie, a Frankenweenie short "Captain Sparky Vs The Flying Saucers, a featurette about bringing Frankenweenie to life, a touring exhibit visit, a music video and more.  "It's alive!"
Posted by BAM at 4:16 PM