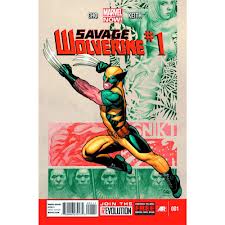 Beginning with the gorgeous Frank Cho cover Savage Wolverine #1 from Marvel Comics begins with a bang and continues to pile on the action and adventure right up to the last page.

Frank Cho not only draws this issue but writes it as well and he delivers on both counts.

The story opens with Shanna and a handful of S.H.E.I.L.D. agents surveying the Savage Land.  As they approach a ‘forbidden island, their aircraft looses all power and crashes. The scene shifts and Wolverine is seen lying in grass, semi-conscious and confused as to where he is.
Suddenly a raptor attacks and Wolverine retaliates.

The Savage Land!  But how did he get there and why?

Surveying the lay of the land he spots some native savages carting a S.H.E.I.L.D. agent on a sling.  He follows them, is attacked, wins and rescues the dying agent.  With his last worlds the agent tells Wolverine about their aircraft crash.  Soon Wolverine finds the craft and while investigating its interior is attacked-by Shanna!

After a moment she recognizes her Wolverine then the two the talk about the S.H.E.I.L.D. mission and why they were in the Savage Land and on the Island.  Suddenly the duo is attacked by flying lizards one of which grabs Wolverine and takes flight.  Wolverine attacks and falls-last page.

I told you it’s an exciting story with beautiful art, lush colors and starring Marvel’s favorite mutant.  Of course Shanna is an added visual treat.
Posted by BAM at 6:34 AM