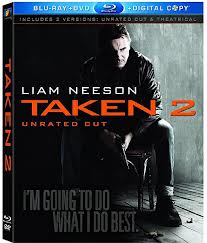 Liam Neeson is back as retired CIA agent Bryan Mills who faces a ruthless foe who is determined to take revenge on Mills for killing his son during the first Taken film.
Bryan and his wife are taken captive and they are dependent on their daughter Kim, who was kidnapped in the first film, to help them escape.

Bryan uses his CIA skills and tactics to get his family to safety and take out his kidnappers.  Every bit as exciting as the first film, Taken 2 is a roller-coaster ride of revenge and retribution.

The Blu-ray/DVD Combo Pack also includes some special extras such as two film cuts, a Black Ops Field Manual and Kill Counter, Tools of the Trade, Deleted and Extended Scenes, an alternate Ending and FX Piece from 20thCentury Fox.
Posted by BAM at 6:28 AM