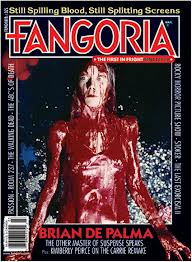 The March issue of Fangoria features a classic Carrie image on its cover and offers inside a look at the new remake of the blood-drenched classic film.

Monster Invasion focuses on some new films such as 100 Bloody Acres, Him Indoors, Horns, Fidelium, and a lowdown on the 2013 Fangoria Chainsaw Awards nominees.

Look back with actress Patricia Quinn at The Rocky Horror Picture Show, five filmmakers talk about their part of the anthology film The ABC’s Of Death, a first-hand witness talks about The Amityville Horror and Chris Sun’s movies dare you to come and get some.

The Manitou Is placed in the Trash Compactor, beware the Midnight Stoker, The Chaser pursues evil, someone discovers He Was The Devil and go for broke with the Dump Bin Diaries.

Witness the warrior among The Walking Dead, the Last Exorcism comes in two parts, apply the Mask Of The White Death and Fangoria shines a new light on The Shining.
Posted by BAM at 6:10 AM