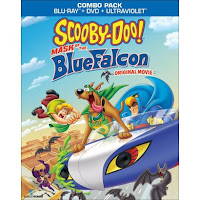 It’s all-out superhero action as Scooby and Shaggy join Blue Falcon and Dynomut at The Mega Mondo Pop Cartoon-a-Con in California with fellow crime fighters Space Ghost, the Herculoids and others.

When the diabolical Mr. Hyde releases his legion of monsters on the world it’s up to Scooby, Shaggy, with the aid of pizza-snacking superpowers, to save the day and prevent the event from being engulfed in ghoulish green goo!

It’s a stellar trip down Memory Lane as some of Hanna-Barbera’s superheroes from the sixties reunite to fight crime once again.

Included on the new Blu-ray/DVD/Ultraviolet Collection comes the direct-to-TV animated movie, some classic Scooby cartoons, and more, from Warner Bros.
Posted by BAM at 8:07 AM