Back in the 1950s Horror Comics came under fire.  Parent groups and shrewd politicians jumped on the censorship bandwagon and decided that comic books (especially Horror and Crime titles) were responsible for the corruption of American youth.

As a result the comic book publishers were forced to censorship their titles by watering them down or eliminating them completely.

During the early 1960s comic book publishers discovered a way to print horror stories, albeit in a different medium than comic books.

Since magazines were not under the censorship umbrella Horror magazines cropped up –slowly at first then eventually picking up momentum until a plethora of titles were available-right up to the early 2000s.


Horror Comics In Black and White: A History and Catalog, 1964-2004, written and compiled by Richard J. Arndt and published by  McFarland & Company, chronicles the rebirth of Horror Comics.


The book traces the publication of each magazine including who the writers and artists were, what stories were included, publication dates and other details.


Stephen R. Bissette provides the foreword to this comprehensive compilation of Horror Comics. 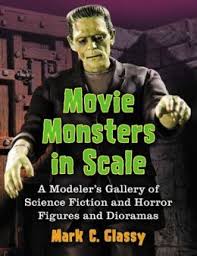 When I was a young man I loved watching horror films-the cheesier the better.  The Universal Monster and Hammer Horror films were my favorites.  I read each and every issue of Famous Monsters magazine and bought and built all the Aurora Models starring Frankenstein, the Mummy, Dracula, the Creature and so forth.

I wasn’t the greatest painter and detailer but my assembled Aurora Models turned out fairly well.  They were no masterpieces by any stretch of the imagination.

For a glimpse at how Monster/Horror Models should be made and assembled check out Movie Monsters in Scale: a Modeler’s Gallery of Science Fiction and Horror Figures and Dioramas, written and compiled by master model-maker Mark C. Glassy.


Mark is a master of assembling models, making his own figures and assembling impressive dioramas.


Page after page is filled with full-color or black and white photos of models Mark has assembled, augmented and built.


Included with the photos are descriptions of the movies they are based on, who the sculptors and manufacturers of the models are and assembly notes from the author.

Looking through the book it is hard to grasp and realize how much work went into each model from painting to adding accessories.  I am impressed and you will be too.
Posted by BAM at 6:28 AM Links to this post 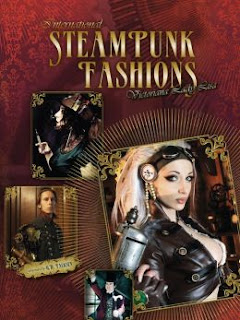 To state that Steampunk is a passing fad would be false.  Steampunk has taken the fashion world by storm.  Based around the Victorian Era, Steampunk fashion melds Victorian apparel with steam-driven industrial design.
Fan of Steampunk are all over the world and its popularity continues to grow.  Author Victoriana Lady Lisa has compiled a beautiful hardbound book, published by Schiffer Publishing, with her International Steampunk Fashions.

Put simply-this book is a load of fun to look through and relish the images.  Lush photos filled with fine apparel modeled by Streampunk aficionados.  I literally spent hours pouring over the book's pages.
Posted by BAM at 6:11 AM Links to this post 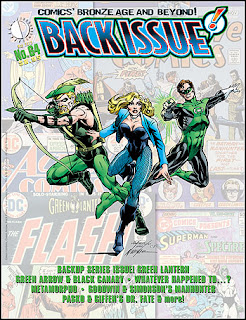 Get ready to travel to Comic’s Bronze Age and Beyond! with Back Issue! from TwoMorrows Publishing.
In this issue, Back Issue! looks back on Green Lantern and Green Arrow as back-up stories in the Flash, The Ballad of Ollie and Dinah, Green Lantern, Green Arrow and Black Canary appearances in The Brave And The Bold and World’s Finest and Metamorpho pops up in Action Comics.

Other second string heroes are showcased in several of DC Comics anthology comics, Rose and Thorn bloom in Lois Lane’s comic, the Seven Soldiers of Victory guest star, Jason Bard does some detective work, go hunting for the Manhunters, discover what happened to Hourman and it’s all a matter of Fate.

Nemesis balances the scales, read some Back Talk and don’t miss all of TwoMorrow Publishing’s other titles.
Posted by BAM at 10:48 AM Links to this post 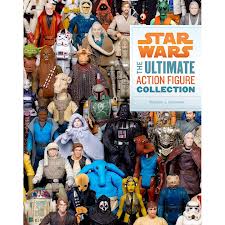 No one knows Star Wars better than author Stephen J. Sansweet.  After all he has the largest private collection of Star Wars merchandise and material in the world.
Who better to write and compile Star Wars The Ultimate Action Figure Collection than Stephen?

The new book from Chronicle Books features full color photos of every (and I do mean EVERY) 3 ½ inch Star Wars action figure every made including variants, prototypes and extremely rare.

Arranged in alphabetical order, the book looks at ALL of the figures produced from the films, animated series and more. Photos are captioned by name and date of production and include some interesting tidbits about their inspirations and production.

I was totally amazed at just how many figures there are.  I knew Star Wars action figures were large in numbers-just how large still boggles my mind.

If you’re serious about collecting Star Wars figures then this is the book you MUST have.  So what are you waiting for-start collecting!
Posted by BAM at 6:33 AM Links to this post

From Mill Creek Entertainment comes three new DVD collection packed with action, intrigue, excitement and most frightening of all, one of them is not fiction but fact.
All 22 episodes of the Flash Gordon TV series come in a new DVD collection.  Follow Flash Gordon and his friends as they discover themselves to be the last line of defense against the forces of Ming the Merciless.  For intergalactic espionage and warfare no one does it better than the original space hero: Flash Gordon!

For the action film fan comes Mill Creek’s 8 Movie Collection of Pulse-Pounding Flicks. Get ready for lots of guns, explosions, hand-to-hand combat and action like you’ve never seen them before.  Starting with The Replacement Killers: the story of a hitman with a conscience, to The Hunt For Eagle One: Crash Point where terrorists attack the collection of films never lets up on the excitement.

Other films include Truth or Consequences, N.M., Love Lies Bleeding, The Point Men, The Contractor, Face of Terror and Blood Crime.

From make-believe movie violence and bloodshed comes the real-life terror of the WWII Nazi horror with Secrets Of War: Shadows Of The Third Reich.

Ten episodes narrated by Charles Heston recount the chronicle of the secrets and strategies of the most evil empire ever to exist.

Learn about Hitler’s Secrets, Secret Weapons, Nazi Propaganda, Nazi Gold, Rommel’s Enigma, the Holocaust, battle and Hitler’s last days.  It all here in a chilling collection of archival clips, re-enactments and interviews that will send a chill up your spine-because they actually happened!
Posted by BAM at 6:31 AM Links to this post