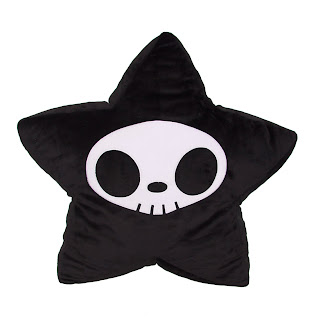 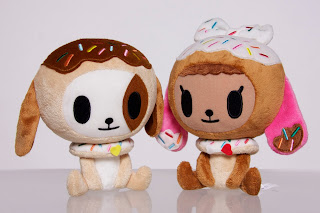 What exactly do a star and donuts have to do with plush figures?  That’s easy; they make great plush toys from Tokidoki (Japanese for “sometimes”).
Tokidoki has just released a trio of new adorable plush figures that longtime (and soon to be new fans) of Tokidoki’s larger-than-life adorable cute characters.

First up is the throw-pillow sized Adios Star pillow made of soft black fabric emblazoned with a huge stylized skull symbol.  Like all of Tokidoki’s plush and vinyl figures the Adios Star is available at select stores and online at: http://www.tokidoki.it/shop/toys/.

I just found my favorite pillow!  What better way to relax than with a five point black star pillow decorated with a skull cradling my head!

I love sweets-especially donuts.  So, when I caught sight of Tokidoki’s new Donutina and Donutino 8” plush figures I could barely contain myself.  Donut plush figures-they look good enough to eat!

Donutina is a light tan puppy with huge black eyes, button nose and small smiling mouth.  The top of her ribbon decorated head looks as if someone has smeared it with white icing and multi-color sprinkles.

Around her neck is a white sprinkle donut collar with a large red heart in the front and her long pink ears ends in icing and sprinkles.  She sits with her small rear legs spread out and her two front legs between her back legs.

Made of soft fuzzy fabric, Donatina is cuddly, cute, extremely well made with nary a stitch showing and is sure to be a big hit with kits and plush fans.

Donutino is a slightly lighter tan with dark tan ears, with chocolate icing with sprinkles decorating the top of his head, large black eyes (one surrounded by a brown tear shape), a button nose, small mouth and posed just like Donutina.

He also comes with a donut collar with a yellow heart instead of a red one.
You can’t help but fall in love with all three new plush figures!
Posted by BAM at 6:34 AM Links to this post

The Dark Knight and Earth 2 #1 Annuals 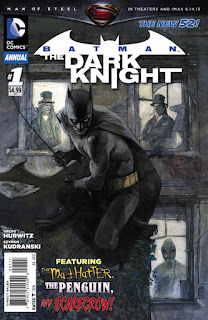 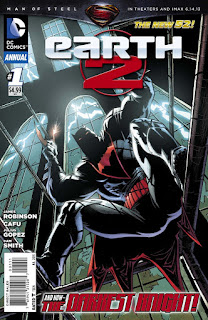 Just when I think I have DC Comics New 52 Universe figured out DC Comics comes along and caught me totally by surprise.  For example: here are two examples.
The Batman Dark Knight Annual #1 doesn’t have Batman in it-at least physically, and yet it is one of the cleverest and most complex Batman stories I have ever read.

When the Mad Hatter, the Penguin and the Scarecrow are invited to the dilapidated Arkham Detention Facility For Youth by supposedly each other, they soon realized they’ve been duped.  But by who?

Eventually they surmise that it’s their arch-enemy, the Batman, who has set up the whole scenario.

Paranoia runs rampant as the despicable trio start to see Batman around every corner, threats in every dark hallway and their troubled pasts come alive.

Driven almost to hysteria the trio somehow manages to gather themselves together and flee the facility vowing never to talk amongst themselves or with others about their weird experience.

And what about Batman?  He spent Halloween night at home that evening and rested confident that on this one particular night of the year “the superstitious and cowardly lot” was best left alone to their own devices.

Different?  You bet.  The art, story and pacing is unlike any Batman story ever created.  Kudos to Gregg Hurwitz and Szymon Kudranski for pulling of such a clever tale.

For a more conventional superhero story (and just a good as the Dark Knight tale) be sure to pick up a copy of the Earth 2 #1 Annual.

Just a few of the surprises you can expect to see in this issue is the new Captain Atom and most importantly the new Earth 2 Batman.

The new Dark Knight is every bit as smart and savvy as the original Batman only he’s not afraid to use weapons and deadly force.

Did I mention that Big Barda, Hawkgirl, Mr. Miracle and…just who is that mysterious woman also appear?

Get ready for lots of fun and surprise as James Robinson, Cafu, Julius Gopez and Cam Smith present the new Earth 2 Annual.  The New 52 will never be the same!
Posted by BAM at 6:36 AM Links to this post

Doctor Who Tardis and Dalek 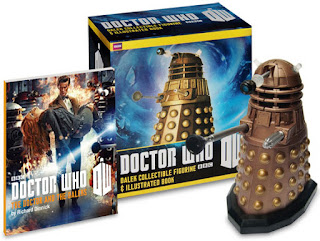 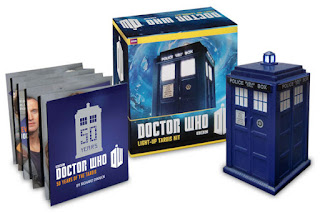 The Doctor invades Running Press!  The legendary Time Lord has transported himself and a few of his friends and enemies to running Press in nice neat little boxes emblazoned with the Doctor Who colors and images.

The Light-up Tardis Kit comes with a miniature Tardis standing approximately three inches tall.  A perfect duplicate of the time-traveling police box the miniature Tardis comes with full window and door details and a small light that illuminates when the on switch located on the bottom of the Tardis is flipped.

Along with the Tardis comes a full-color foldout booklet with photos of all 12 Doctors along with short info bits about important events that occurred with each individual Doctor.

The small Tardis comes bubble-wrapped with the booklet snuggly slipped in beside it.


The Dalek Collectible Figurine and Illustrated Book come packaged in the same size box as the Tardis.

The copper and gold Dalex is complete with swivel eye, weapon and disintegrator.  Twin translucent censors sit atop its domed head and two rear stationary wheels and a swivel front wheel allow the diminutive figure to roll and move about when pushed. Pay particular attention to the details on the Dalek main body with its sectional upper chamber, round half spheres on its lower torso and the sandwich-paneled head unit.  Perfect!

A small square-bound booklet comes with the Dalek that traces the history of nefarious Doctor Who villains.  Full-color photos abound along with informative text.

To coincide with the release of the new Star Trek Into Darkness movie, Gallery Books has released two unusual Star Trek oversize paperbacks.

Most people don’t associate Star Trek with home crafts-but that is about to change.

Just a few of the clever crafts include a Klingon serving tray, a Spock monkey, coasters, pillowcase, apron, sleep masks, book of colors, Federation centerpiece and various other household, clothing and accessory items.

Get crafty, get the Star Trek Craft Book and ‘Make it so!”
Posted by BAM at 8:13 AM Links to this post