Man Of Steel: Inside The Legendary World Of Superman 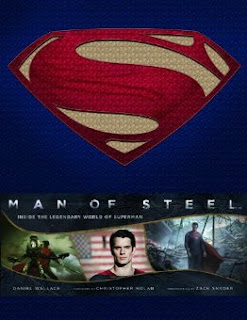 If you haven't seen the Superman: Man Of Steel movie yet, I urge you to do so.  While paying homage to the famous superhero the movie also introduces new facets of Superman and 'tweaks' some elements of his origin.  I loved it.
Man Of Steel: Inside The Legendary World Of Superman, the new book from Insight Editions, is every bit as spectacular as the movie.

Beginning with its Superman emblem embossed cover, complete with the same texture seen on the cinema version of Superman's costume, the oversize, hardbound book is....super!

Daniel Wallace is responsible for the look and feel of the book and the film's co-producers and director: Christopher Nolan and Zack Snyder provide the Foreword and Introduction.

Flipping through its pages I was amazed at the plethora of production art, color photos, character and environment designs, alien spaceships and worlds concept drawings as the entire world(s) of Superman and Clark Kent came alive through illustrations and artwork.

I could not helped but be impressed by the sheer artistic talent it took to put such a monumental film together.  Speaking as a graphic designer I was blown away by the technical know how and scope of the work accomplished.

The book is a real testament to the film and as a work of art itself it will make a fine addition to anyone's film library.
Posted by BAM at 10:18 AM