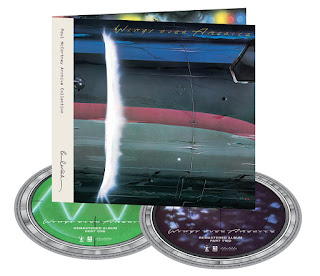 In the early 1970s Paul and his wife Linda gathered together a band of friends and thus was born the band Wings.

With Wings Paul was able to churn out small personal songs and strong and powerful group songs.  The album Band On The Run was the cream of Wings collaboration and at the height of the group’s popularity Paul and Wings toured America performing an appropriately named concert: Wings Over America.

Contained on the discs are such McCartney, Wings and Beatles classics performed live by Wings.  Included with the disc collection is a Wings pictorial booklet all packaged in an attractive two-sleeve CD holder.

Relive the 1970s with the hottest group of that time period with the Paul McCartney Archive Collection: Wings Over America.
Posted by BAM at 6:27 AM