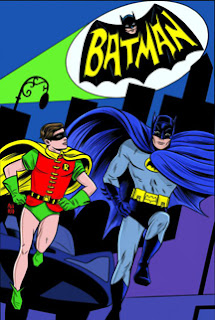 Back in 1966 the ABC Network premiered a new TV show that immediately sparked my interest.  I was 13 years old, had been reading and collecting comic books since I was five and I especially liked the Batman comic book from DC Comics.
Although I primarily read Marvel Comics titles, several DC titles were still a part of my reading stable.  While Marvel Comics tended to be more 'mature', DC Comics held a certain spark of fun in them laced with tongue-in-cheek.

Curious I tuned into the first episode of Batman and I was immediately hooked.  What 13 year old boy wouldn't have been?  Batman, Robin, the Batcave, the Batmobile, a cool Rogues Gallery of villains and lots of Biff! Bang! Pow!, what a combination.

DC Comics, in a fit of nostalgia, has released a brand new comic book series based on the Batman TV series and they hit the nail right on the head!  I thought I was reading an episode of the TV series.

The art matched the look of the show right down to the bright colors, tacky sound effects and over-the-top costumes and locations.

Writer Jeff parker and artist/colorist Jonathan Case have done a spectacular job of translating the Batman TV series to the printed page with a simplistic plot, cliché riddled dialogue and predictable ending, and that suites me just fine.

I feel like I'm 13 again. How can you go wring with both the Riddler and Catwoman in the first issue?!  "Riddle me this.  What's bright, old but new and carries the same moniker as a famous highway?"  You guessed it-Batman '66.  "Holy nostalgia Batman!"