Two more Limited Edition model releases just came out from Hasegawa Hobby Kits and they are as different as night and day. 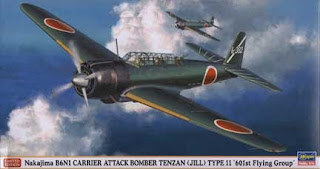 The Japanese WWII Nakajima B6NI Carrier Attack Bomber Tenzan Type 11 (Jill) "601st Flying Group" aircraft comes scaled at 1:48 requires the skills of a seasoned modeler.  The highly-detailed aircraft takes a steady hand to assemble, paint and decal.  Instructions guide the model maker through the process with step-by-step assembly guides.  Paint colors and schemes give the model its authentic look while the decals add the finishing touch.

Eight part trees hold the easy to detach parts with minimal trimming of flashing.  Before you know it you'll have you authentic looking aircraft as a table top display or hanging by threads from the ceiling.

Designed in the late 1930s the aircraft held much promise.  Its powerful engine and large size (with room for three), also boasted impressive armament, the promise of long flight capabilities, maneuverability and speed.

Unfortunately even after being refitted with a smaller engine the aircraft failed to live up to its potential and while over one thousand aircraft were manufactured they did not play a significant role in the war.  Still the overall design of the aircraft is unique and makes for an impressive model. 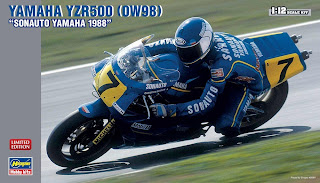 For a different kind of speed check out the Yamaha YZR500 (0W98)  motorcycle from the 1988 Sonauto-Yamaha team.

This low and on the go crotch rocket won ten world championships and was diver by driver by France's Christina Sarron.  His 1988 team scored an impressive 149 points and 4th place.

One look at this blue and yellow two-wheel rocket and its easy to understand why it and its driver are so revered. Measuring in at 1:12 Scale the motorcycle is a miniature marvel of detail and craftsmanship.  Take a moment to look over its sleek design, tightly integrated parts and how well the pieces fit together with hardly any seams.

Follow the instructions and with a little patience, paint, glue and decals your two-wheel bullet on wheels will be yours.
Posted by BAM at 4:49 PM