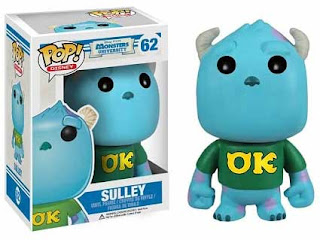 Vinyl figures are all the rage.  Over the past ten years the popularity of fully-molded and partially articulated figures has mushroomed.
More often than not the figures are cutified versions of the animated, literary or movie figures they are fashioned after.

POP! Disney recognized a good thing when they saw it and vinyl figures are big sellers in Disney retail stores and other stores that carry Disney products.

Three figures make up the Super-Stylized Vinyl Figures designed and created by FUNKO.
Recently at the prestigious San Diego Comic Con, held in California, a limited edition version of Sulley was on sale exclusively at the convention.

The partially articulated figure (its head moves) Sulley figure looks similar in appearance to the general release figure except for the SDCC figure is painted in metallic colors.

The figure comes packaged in a small rectangular box with a clear panel front, a SDCC sticker, a Monster University logo, and illustration of the figure decorates all sides of the box along with small illustrations of other figures in the set.