It's Only A Game 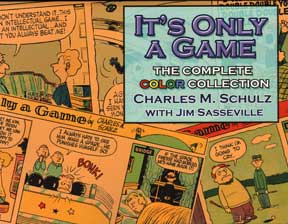 Mention the name Charles Schulz and most people will immediately talk about his world famous comic strip Peanuts starring Charlie Brown, Linus, Lucy, Snoopy and their children friends and family.
But, did you know that Charles Schulz created a single panel cartoon strip besides Peanuts?
Schulz loved sports (he had his own ice rink where he played hockey) so it should come as no surprise that his 'other' comic strip was based around sports.

It's Only A Game ran during the 1950s and although it never became the mega-hit Peanuts did it was still a funny gag strip.

About Comics has collected ALL of the It's Only A Game color single panel strips into a new softbound book that Charles Schulz fans are sure to want.

Schultz was known primarily an artist who drew kids, It's Only A Game features grownups and panels packed with details unlike the minimalist Peanuts.

For a good chuckle (or chuckles) It's Only A Game provides quite a few.

Additional note: artist James Sasseville was a good friend of Charles Schulz. So good a friend in fact that he often 'ghosted' Schulz's style in various Peanuts projects (Schulz always did the Peanuts strip) including It's Only A Game.