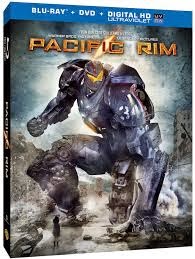 Giant monsters (Kaiju) and giant robots (Jaegers) battle it out with the world crumbing around them.  It doesn’t get much better than that.
If you’re looking for a deep philosophical message in director Guillerno Del Toro’s Pacific Rim film from Warner Bros. you can forget it.

Oh sure it has its touching moments and some character development but let’s face it-it’s the monsters and robots that are the stars of the film.

When it is discovered (rather destructively) that a space rift has opened at the bottom of the Pacific Ocean that allows giant Kaiju to pass into our world and wreak havoc, the world units to fight back.

The results are giant robots manned by two pilots (one responsible for the left hemisphere and one the right via cerebral links with the robots) that manage to ward off the rampaging beasts and bring relative peace to the world…until….

Suddenly the escalation of the beasts increases and the frequency of their arrival shortens.  To make matters worse the creatures themselves seem to be evolving, becoming larger and more ferocious.

It’s up to an elite team of Jaeger pilots to take a nuclear weapon to the bottom of the rift, detonate it and seal it off from future monster invasions.

Of course things manage to go terribly wrong, people die, monsters destroy even more and at the last moment a valiant hero emerges who saves the day.

OK, formula film making as far as the story goes. But those monsters and robots!  It makes a fan boy’s heart flutter!

For sheer fun watching a film be sure to pick up a copy of Warner Bros. Blu-ray/DVD/Digital HD Ultraviolet Combo Pack and get ready to fight some monsters!

Extras include 14 featurettes that look at every aspect of the film from creating the monsters and robots, stunts, special effects, cast and crew interviews, the making of the film and more.  Additional extras includes a Director’s Handbook, the Digital Artistry of Pacific Rim, an audio commentary and did I mention the 3D cover?  Yowser!
Posted by BAM at 8:14 AM