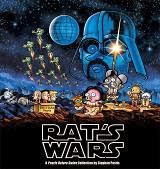 Pun-filled and poignant, Rat’s War is a fun-filled, frame-by-frame, feel good funfest comic strip fans will love.
Posted by BAM at 7:20 AM