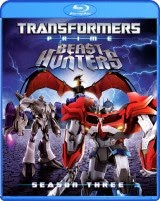 Shout! Factory presents the Third Season of the highly acclaimed computer animated series Transformers Prime Beast Hunters that continues the battle between the Autobots and the Decepticons on Blu-ray.
With the Autobots’ headquarters destroyed Optimus Prime and his valiant band of Autobots are scattered across the country and out of contact with one another.

Shockwave brings a new Decepticon weapon to Optimus Prime but will it turn the tide to the side of the Autobots?

Hold onto your hats as the final battle between the Autobots and the Decepticons escalates in the latest, greatest and final season of the series comes to a head.

Bonus features include commentaries and the Transformers Prime Panel at the 2013 San Diego ComicCon International.