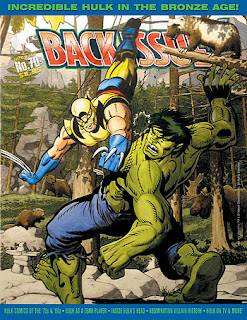 Marvel Comics Jade Giant is the subject of this issue of Back Issue! from TwoMorrows Publishing.  Discover the facts about the Bronze Age Hulk and those who were responsible for his gigantic adventures during this time in comic book history.


This issue’s cover recreates the classic clash between the Hulk and Wolverine on the front cover of the Incredible Hulk #181: the first full appearance of Marvel’s Adamantium claws Canadian super-hero-Wolverine.

Articles and art in this issue include:


DC Comics’ Hulkmania during the summer of ’66


FLASHBACK: Hulk Smash: The Incredible Hulk in the 1970s


Richard Simmons as the Hulk? Karl Heitmueller, Jr. is at it again!


FLASHBACK: All About the Green: Hulk Merchandise in the BACK ISSUE Era


Admit it—you’ve got a Hulk Mego on your shelf…


Hulk smash Peanuts! When Ol’ Greenskin was read in black-and-white


BRING ON THE BAD GUYS: The Abomination: Diary of a Mad Monster


Is Emil Blonsky playing with a full deck?


FLASHBACK: Hulk Smash More: The Incredible Hulk in the 1980s


FLASHBACK: Teaming Up with the Hulk


OFF MY CHEST: Three Men and a Little Psyche


How Mantlo, David, and Freud redefined the Incredible Hulk


Reader feedback on BI #65 and more