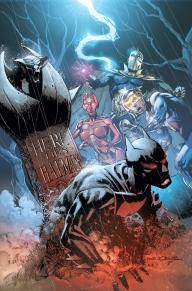 The secret of Earth 2’s Batman identity is revealed!


On Earth 2 young Thomas Wayne (future father of Bruce Wayne) saves the life of a gangster.  In gratitude Thomas is invited to one of the gangster’s infamous parties.

Warned not to attend, Thomas does so anyway since the mobster wants to show his gratitude.  Bad choice.  He is instantly taken in by the mobster’s hedonistic lifestyle.  He is also introduced to Martha.

Eventually Thomas supplies drugs to the mobster that he has pilfered from the hospital he interns at.  The drug turns a tidy for both the mobster and Thomas.

Thomas and Martha’s friendship blooms into love; they marry and have a son, Bruce.  Martha insists Thomas end his criminal lifestyle and set a good example to his son.  The mobster is not pleased that Thomas wants to stop his drug trafficking and orders a hit on Thomas.


One night, both he and Martha are gunned down in front of their son’s eyes-so is born the Batman-round one.

Years later someone is crushing the skulls of various mobsters around town.  Batman investigates and discovers that his father is very much alive and is using a drug he stole that enhances his strength and endurance for one hour at a time.  They clash and Bruce is injured by his father.

Rejecting his father, Bruce continues his crime-fighting as Batman and he and his new wife have a daughter-a daughter who would eventually become Robin.  Several more years pass and Bruce is killed.

In penance for his life of crime and for lying to his son, Thomas Wayne takes up the mantle of the Batman as tribute to his son.  Now addicted to the drug injections that give him his powers Thomas brings a new level of savagery to the table as Batman.

It’s easy to see why the Earth 2 Batman has become so popular.  I’ve enjoyed the whole storyline in Earth 2 that involves him.  Perhaps one day he and DC Comics’ Earth 1 Batman will meet.
Posted by BAM at 6:27 AM